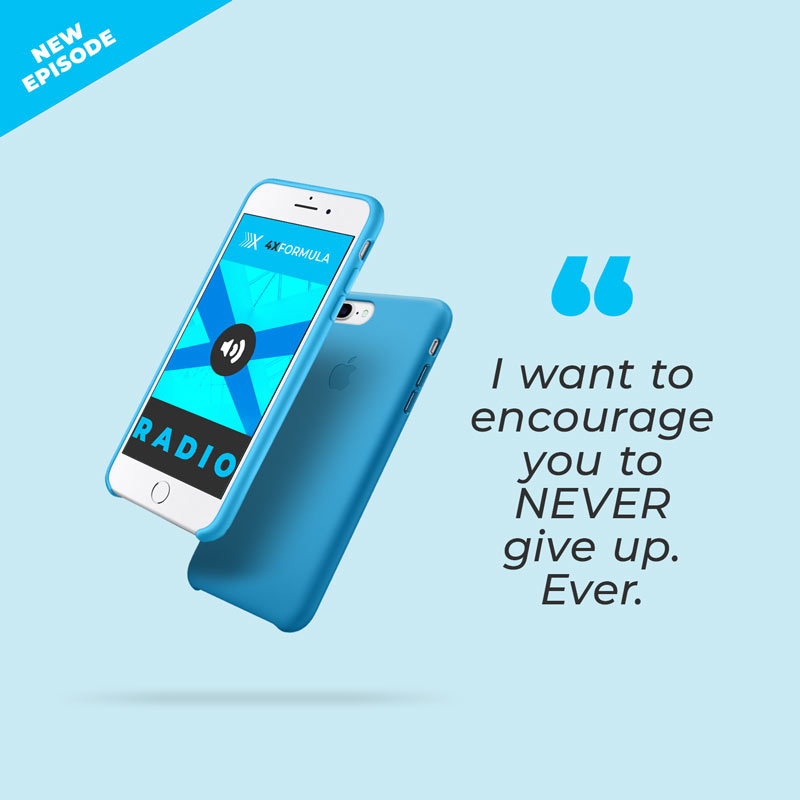 Hey all you future 4X’ers out there.  Thanks for tuning in again to 4X Formula Radio once again.  If you are here for the first time, welcome.  This is a place for Real Estate professionals to get exclusive content that works in sync with our 4X formula Real Estate course with the ultimate goals of creating the Dream Real Estate Business.

In order to reach higher levels in income in any occupation, more often than not, it is compulsory that a certain level of education or a certain degree be obtained.  Given that we can become licensed Real Estate professionals fairly easily.  We order up and take a licensing course that can be completed in 3 to 12 months at a cost under $2000 and we can do it part time by correspondence while making income for our households… And once we are licensed, we have the opportunity to make hundreds of thousands of dollars.  There is really no ceiling.  Do you think that it is fair that we still have some education that needs to be obtained in order to justify the income that we want to enjoy?

Its un-avoidable…so I am officially granting you enrollment in Adversity University!

Hi, I’m Kelly Johnson, founder of the 4X formula, and the big question is this: How are real estate agents like us able to create a constant stream of commissions and a constant stream of leads while enjoying life without wasting big budgets on branding, without working crazy hours, without worrying where the next deal’s coming from in today’s real estate market? This podcast is here to reveal the answers.

My brother works for a public company that does business all over the world.  He has moved up the ranks to the highest level that he could achieve.  In his 40’s he went back and achieved his Executive MBA for business.  He and I are very similar in many ways, but one big difference is our intellectual levels.  His is simply very high.  Mine is quite a bit lower.  But that’s ok.  I just have a different mind than his and I am ok with it.  I am very proud of my brother for achieving that.

The reason he paid a lot of money and went through that gruelling course while working in his job for a large company, sacrificially, for 2 years, was because he knew that he was basically capped out on what he can earn.  I don’t know much about the corporate world but what I do know, is that the CEO’s and the CFO’s and the COO’s and all of those “O’s” have to be accountable to the shareholders that they serve.  They earn really good incomes but there are accountability measures that need to be met so that everything holds up to scrutiny when they report to the shareholders.

Steve, simply did not have any digits behind his name that would support him being qualified to move up to a larger role in the company, nor did he have the education.  He was well qualified for sure with his YEARS of SERVICE and the obstacles that he helped the company overcome over the years but the proof of the appropriate level of education had to be achieved in order for him to make the jump.

If you have been listening for a while, you will know that I have faced a lot of adversity throughout my Real Estate career.  Maybe, more than most.  But as I look back on that, I think that was important to get me ready for what I am doing now with the 4X Formula Real Estate Mastery Course.

After sorting through all of the confusion; and experiencing the pain and all of the personal struggles; surviving the financial losses; the heartache and disappointments of business failures etc., I now know the purpose that all of that served.  And that is to benefit you.  The listener.  While you are going though it, it really sucks.  There were days when I felt that I just did not want to get out of bed.  There were days when I wanted to succumb to it all but I kept going and eventually I came out the other side.

Now having said all of that, I don’t want you to waste 17 years like I did.  I have the systems, the plan, the “how-to’s” and everything laid out for you with Tools to help you implement those systems etc…but hear me on this….that doesn’t take away ALL of the challenges that you will face.  We can’t predict everything.  It is silly to believe that I can arm you against every single circumstance….but we do cover a lot.  We do provide a short-cut and we do provide the direction.  We do provide the path and we do provide the back pack of tools but sometimes the trail will be hard.  There will be times where you are going to have to dig in to make it up the hill and you have to be committed.  That is where you step in…but in doing so you will gain the following:

In other words, you will be worthy of the success that you will enjoy and have the character to avoid squandering it away.  You will have fantastic relationships and enjoy the DREAM Business.  I want that for you.

Here’s a story that you may have heard but it illustrates the importance of attending the ADVERSITY UNIVERSITY.

A man was walking in the park one day when he came upon a cocoon with a small opening. He sat and watched the butterfly for several hours as it struggled to force its body through the little hole. Then it seemed to stop making any progress. It looked like it had gotten as far as it could, so the man decided to help the butterfly. He used his pocketknife and snipped the remaining bit of the cocoon.

What the man in his kindness and haste did not understand was that the restricting cocoon and the struggle required for the butterfly to emerge was natural. It was nature’s way of forcing fluid from its body into its wings so that it would be ready for flight once it achieved its freedom. Sometimes struggles are exactly what we need in our lives.

If we were allowed to go through life without any obstacles, we would be crippled. We would not be as strong as what we could have been. And we could never fly.

History has shown us that the most celebrated winners usually encountered heartbreaking obstacles before they triumphed. They won because they refused to become discouraged by their defeats.

Thomas Edison tried over 2,000 experiments before he was able to get his light bulb to work. Upon being asked how he felt about failing so many times, he replied, “I never failed once. I invented the light bulb. It just happened to be a 2,000-step process.”

Franklin Delano Roosevelt, elected president of the United States for four terms, had been stricken with polio at the age of 39.

In 1927 the head instructor of the John Murray  Anderson Drama  School instructed student Lucille Ball to “Try any other profession. Any other.”

Buddy Holly was fired from the Decca record label in 1956 by Paul Cohen, Nashville “Artists and Repertoire  Man.” Cohen called Holly “the biggest no-talent I ever worked with.”

Helen Keller, the famous blind author and speaker, said: “Character cannot be developed in ease and quiet. Only through experience of trial and suffering can the soul be strengthened, vision cleared, ambition inspired and success achieved. Silver is purified in fire and so are we. It is in the most trying times that our real character is shaped and revealed.”

Does that mean that they didn’t have a little pity party once in a while?  Does that mean that they didn’t need a little time to lick their wounds?  Of course.  We are all human.  But the difference is how you react and approach challenges.  The struggle is what gives us power.  Just because you: make a decision to get focussed… Create new habits… Get yourself on the path of success…begin filling your brain with good nourishing information and material…plan you business and work the plan…set goals and create a solid and fleshed out WHY to help you propel forward…Learn all of the best practices to master your craft…

Literally do all of the right things to move yourself forward in a positive way….does not mean that negative things won’t happen.  They will.  Its guaranteed.  These are the tests, these are the exams, these are the pop quizzes that come from the University of Adversity.  If you don’t graduate from the University of Adversity you will end up like the butterfly that can’t spread its wings.  You will literally be stifled and stunted.  The funny thing is, when we go through a challenge or a set back we think that is what is stifling us….we think that That is the blockage to our success…the wall – to give you a visual.

Its not.  Its just an obstacle.  Something to get over.  Something to overcome.  Even if you have to start again….you will do it better.  I did in 3 years what I couldn’t do in 17 years…..you bounce back way stronger, way smarter, and way faster each time.  I want to encourage you to NEVER give up.  EVER.  When you give up, you know the result.  Its an absolute.

If you are going in a direction that is wrong….it is ok to stop.  Start over and go in a different direction….don’t assimilate that to “giving up”.  That is way different.  See the power in that.

Whether you like it or not….it is not a choice.  It is not me who enrols you in the University of Adversity by the way…..You are attending.  You can avoid going to class.  A lot of people do.  You can skip the lessons…that’s easy.  Find something easy and predictable.  No problem….there are a lot of jobs out there….but that’s not you.  You are in it to Win it….You are here to win….otherwise you wouldn’t be here.

Can I make that assumption?

Step into the Master Class and let’s win together… go to 4X Formula to learn more.  I hope you stick with me and let’s transform the Real Estate Industry together in two ways…..let’s eliminate Real Estate poverty and let’s create a new persona to the general public and get out of that top 10 least trusted professionals list… Are you with me!!!!

I hope you found value in our chat today… Go out there and Make a great Day!!