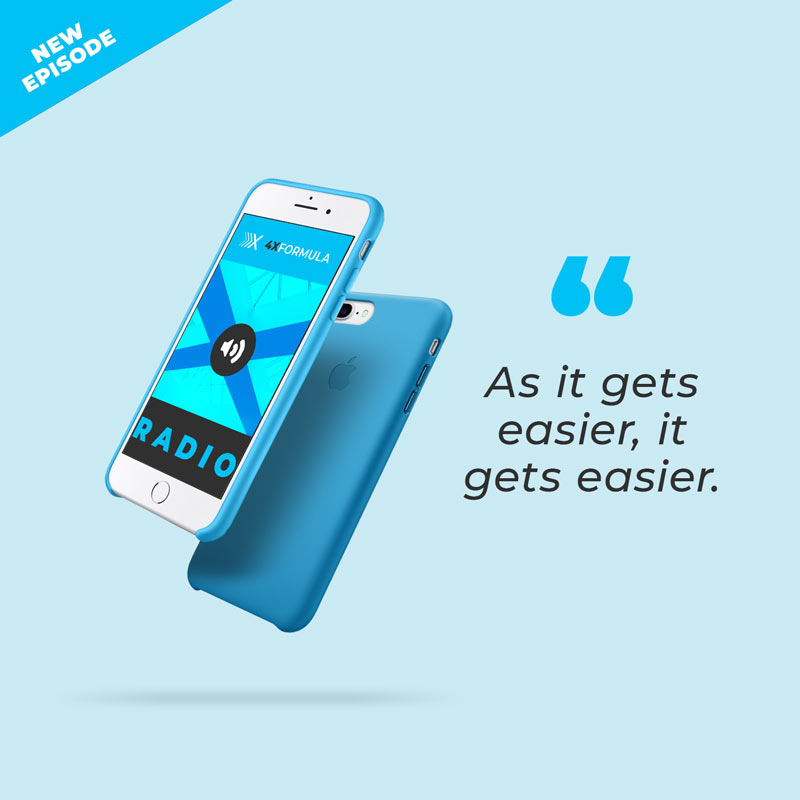 Easy or Hard... Which is better?

Hey all you future 4X’ers out there…Welcome once again to 4x Formula Radio.  I am excited that you are here today.  Especially today!  I have decided to do something unique.  Today we are going to discuss how easy it is to create an amazing Real Estate Business.  I am going to give you the 3 secrets that will make you $200,000 in the next 3 months!  I am so excited to reveal these simple and easy steps that you can do pretty well while you are sleeping to make $200,000 in the next 3 months….I can’t want to talk to you about this….but first the INTRO…

I am so glad that you are back…..AAAAND here we go… – I was just joking.  Guess what!  There is no easy method to make $200,000 while you are sleeping and if someone tells you that, they are lying.  For a second, you really wanted to believe it right?  I would.  I would really like to believe it for sure. Wouldn’t you all like to know how to make $200,000 in 3 months while you are sleeping and if it is at all possible, even a little bit…if there is a chance….man it would be awesome to know that right?  I get it.

Do you play the lottery?  Why do you play it?  I would think that the reason is, that it’s a relatively small investment for the potential windfall that could happen.  There is something attractive about that.  “Hey You Never Know!”….right?  You begin to imagine your life with an extra 5 Million or 25 Million dollars and the possibilities seem endless!!  Spending 5 bucks on a ticket to potentially win that seems trivial. Doesn’t it.

Did you know that 70% of the people that win large windfalls of money in lotteries, basically lose that money within 3 to 5 years and many actually go bankrupt.  They literally end up in a worse state than before they won the lottery.  Studies have also shown that a lot of the people that won the lottery have had family members overdose, some people have gone into deep depressions and have experienced broken families as a result.  I would argue that winning the lottery would be considered easy.  Easy money.  This windfall should be life changing right?

You’d think that all of the negative things would disappear.  Receiving all of that money, should take someone out of the challenges that they were facing and into a place where they have a chance to make a great life for themselves.  But the truth is….the money doesn’t bring the happiness. The things that money can buy don’t bring the happiness.  It proves that it is not the money that is the difference.  The money is not the factor.  The money is not the variable.  Is it good for us to have an easier life?  We fall into this mentality all the time.  We look for the one thing.  The Easy solution.  We do this naturally.

All of the Apps out there.  All of the inventions that succeed and end up in our marketplace; All of the new products and new technologies that we integrate into our lives… Are all about making our lives easier.  Think of the invention of the wheel.  What a game changer that was.  From that point forward, the human race has made amazing revelations and innovations that have integrated into our society.   We can get on the computer, or use our phone while at work and place an order and, we can get our groceries delivered to our door!  We are in a constant mode of creating ways to make things easier.

But I would contest that these things are ok.  The playing field is still level.  The majority of people have access to most of the these things.  It is more about leverage and utilization.  For example.  When I got into the business in the late 90’s we still had beepers and the Motorolla flip phone was just getting invented.  Nobody was texting yet and we were still handwriting contracts on carbon paper.  “Press hard, we are making 4 copies”… The MLS system was in a book that was printed every 2 weeks.

Now I can do most of my business from a cell phone.  My computer fits in a satchel.  With online signing programs, I can do more business and work less hours.  Fax machines weren’t very reliable so I had to meet everyone even for a quick initial.  Now, I drive about 20,000 to 30,000 kilometers less than I used to on an average year.  Has technology helped our business and allow us to give much better service more efficiently?  I believe the answer is a resounding – YES.

The Question that I posed in the title of this podcast was – “What’s best for us…Easy or Challenging?”

I instinctively want to make things easier for my children sometimes.  I have to keep myself in check.  My wife and I talk about this all the time.  We want better lives for our children, don’t we all.  But if I give them all of the opportunities, or make it too easy for them, without them having to go through any challenges am I hurting them or helping them?  Will they actually embrace those opportunities and maximize them to the fullest?  That is the question.  This is the quandry.  This is the struggle.

If you listened to the podcast entitled – Adversity University – I told the story about the Butterfly struggling to get out of its cocoon and then a man came along and decided to help the Butterfly…we discovered that his good intentions actually hurt the butterfly.  Struggle is what shapes us.  Struggle is what we need in order to bring out the best in us.  All the movies that we watch have a certain formula.  There is always a struggle.  There is the high point and the low points that the character goes through.

But if the story is compelling enough then what happens to us as the viewer?  We begin to cheer for the character.  We want him to prevail.  We want him to win.  There is no story without struggle.  We love those stories.  Why is that?  Because we celebrate the overcoming.  The grit.  The perseverance.  The Character Growth.  They usually had to learn something about themselves and then correct something or deal with, some sort of shortcoming or character flaw, in order to succeed.  We see the struggle they went through and we empathize.  Then when they overcome those things and eventually succeed we are so excited for them.

Remember the Rocky Movies?  The first movie was an amazing story of struggle.  An amazing story of overcoming the odds.  But remember the 3rd movie?  In the movie, Rocky Balboa is shown resting on his laurels, living the good life, doing American Express commercials and photo-ops and slacking off his training regimen. In stark contrast were scenes of the ominous Mr. T, training hard, sweating, bleeding and pouring out every last ounce of effort to become the boxing champion of the world. After the death of Rocky’s trainer, played by Burgess Meredith, Rocky’s friend (and former rival) Apollo Creed, played by Carl Weathers, implores Rocky to get back “The Eye Of The Tiger,” meaning his edge and his hunger to be the champ.

Remember the song?  The Eye of the Tiger?  This song is played when he gets to a point in the film where he has come to the recognition that he has to dig in and get back to his roots and re-ignite his passion.  The second verse of the song speaks to that:  “So many times it happens too fast – You trade your passion for glory – Don’t lose your grip on the dreams of the past – You must fight just to keep them alive…”

That was in 1982.  Ok I am totally dating myself.  We loved Rocky Balboa.  We cheered him on. The tension in the movie was amazing.  We hated Mr. T.  He was scary.  What made him so scary was that he was training so hard.  He was preparing himself for certain victory, and he was mean.  He had a killer instinct.  He was a worthy rival for sure.  This is why he was so scary to us the viewer.

Even the fight scene itself was a journey.  There was a moment when we thought he was beat.  He was getting beat up pretty badly.  But then his determination and perseverance kicked in…he had to dig deep.  Then when he won at the end, we all celebrated and cheered for Rocky!  Because of the journey he went through.  We didn’t like the flabby Rocky.  We didn’t cheer for the Rocky doing commercials and TV interviews.  We didn’t like who he was becoming.  There were even times when Rocky himself didn’t like himself. His wife was concerned.  His friends were starting to be alienated.  This was the beginning of the downfall.  If he didn’t get back to his WHY – his root cause – his passion, he was going to spiral downwards.  His relationships would suffer and he would end up unhappy.

There is a bit of a parallel here with the Lottery Winners?  Perhaps this has something to do with the downward spiral that 70% of those winners experience.  The truth is, there is no easy 90 Day plan to make $200,000 in Real Estate.  Now if you have the business built up to a certain point and the seeds are in the place to make it happen…you can earn that.  I am not saying it is impossible to earn $200,000 in a 90 day period.  That is absolutely possible.  But it depends on where you are in the journey.  Where you are in your business development.  Where you are in your personal development.

That takes a lot of work.  A lot of determination.  A lot of focus and intention.  A lot of perseverance.  With the proper training, systems and a fully developed WHY… you can do it.  I really believe that, but let’s not be fooled by the “quick get rich” schemes.

Honestly, I think that the Real Estate business is relatively easy compared to a lot of other vehicles for earning income.  Once the habits are created.  Once the systems are in place.  Once the skill sets are developed.  Once the know-how is solidified… Our business is actually pretty easy.  Because – I say this all the time – As it gets easier – it gets easier.  But in order to get to that point, you must make a decision to dig in and work on all of the aspects necessary, in order to be a successful real estate agent.

Go to 4XFormula.com to learn more.  Get on the waiting list.  Its FREE to get on the waiting list.  We will be releasing the first FREE training session very soon.  I am very excited. This has taken a lot longer than I thought.  But that’s ok.  The journey has been wonderful and it is because of that, that this will be better than I could have ever conceived of, when I started this project.

Thank you once again for tuning in and I want you to know that I appreciate you.  Truly.
This is Kelly Johnston signing off for today.
Go out there and make a great day!